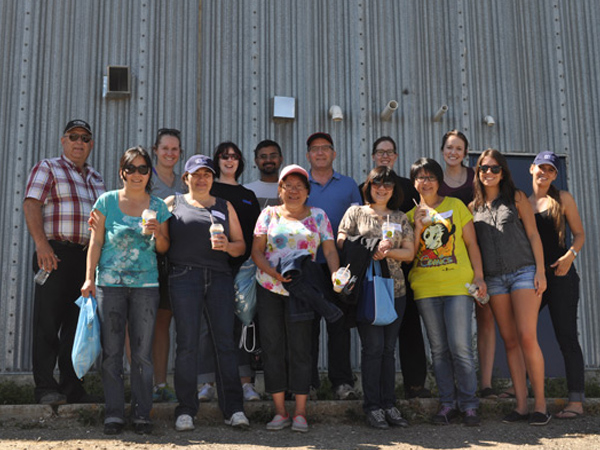 The devastation from the Southern Alberta flooding affected many of our CEDA employees and community members.  CEDACares acted quickly and looked for ways to help support our communities during a time of need.

Due to the mandatory evacuation of all High River citizens, CEDACares organized a volunteering event at the High River Evacuee Shelter in Blackie, Alberta..

On June 26th and 27th, a group of CEDACares volunteers helped organize donations, including clothing, toiletries and toys for the evacuees. Volunteers also shuttle families to pick out essential items as well as helped with security at the shelter, ensuring everyone’s needs were met.

CEDACares also donated large bins, work clothing, underwear, baby formula and hats, items that were often forgotten about or were in high demand at the shelter.

Recognizing our ability to offer equipment and skills that would help with flood relief, CEDA began to look for opportunities to volunteer our services.

On July 4 and 5, CEDACares organized a small team of volunteers who went door-to-door with a Hydro Vac truck asking residents of High River how they could help. The team assisted by removing the sludge that was left behind after the flood as well as with basement demolition.

Even though it was a messy job, our volunteers rolled up their sleeves and got the job done! After two days of volunteering, CEDA was able help with the recovery of five families’ homes at no charge to the families.

Through CEDACares, employees across Canada were able to support those impacted by the flood by organizing a silent auction with all proceeds going to the Canadian Red Cross Alberta Flood Relief Fund. With overwhelming support, the total raised by the auction in just five days was over $10,000. With CEDA matching all donations, CEDACares donated a grand total of $22,664 to the Red Cross. Our people made a positive impact in our communities during a time of need. This truly was Caring you can count on!