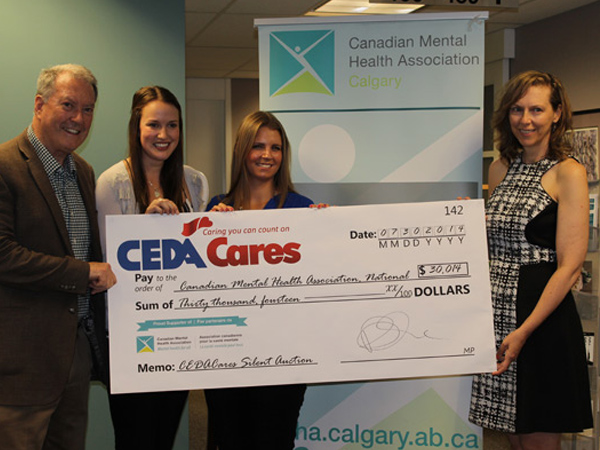 For the second year in a row, CEDA held a silent auction to raise funds for a Canadian organization. This year, CEDA raised more than $30,000 for the Canadian Mental Health Association. New items were included in the online silent auction this year, including a variety of experiences donated by our executives.

With the overwhelming support from our employees, CEDA was able to raise $8,000 more than the 2013 Silent Auction. The experiences donated by the executives were reflections of their passion such as hunting with President & CEO Kevin Fleury, or enjoying wine and food pairings with CIO & EVP Corporate Services, Roberta Roesler.

Greg Barrett, Vice President Pigging and Decoking, generously gave the closing donation pushing the amount raised over the $30,000 mark. “I believe that mental health issues are becoming more prevalent in many of our lives. I am happy to be able to contribute in any way I can,” said Greg.

On July 30th representatives from CEDACares presented the Canadian Mental Health Association with CEDA’s donation. The representatives at CMHA expressed their sincere gratitude for the donation and took the time to share how CEDA’s donation would help the organization. They also presented CEDA with a copy of their new book “Sick to Death of the Silence”, a collection of stories to help break down the stigmas that surround mental illness.

“Due to the stigmas, mental illness does not receive enough attention, let alone enough support. It was powerful to think of how our donation could help”, said Bailey Quaite, Community Engagement Specialist and auction coordinator, “None of this would have been possible without support from CEDA employees. The employees who helped coordinate the auction, the employees who donated items and experiences and, of course, the employees who bid. It’s so great to work for an organization that is full of people who passionately get behind such an important cause”.